It is unfortunately not uncommon for people who start out learning Japanese to receive bad advice that tells them to dedicate most of their effort to learning Kanji in isolation from the rest of the language for a couple months before moving on to other basics.

It’s not obvious that this is a mistake. In fact, it seems like a really good idea. Get the annoying aspect of one of the hardest parts of the language out of the way before moving on to the rest.

But in reality, for most people, it’s very demotivating, and gives them the wrong idea about what learning Japanese is going to be like. A lot of people drop out early because of it, and the ones that don’t drop out usually don’t see anywhere near as clear of benefits as they thought they would.

The position expressed here is based on watching several beginning learners struggle with the fundamentals of Japanese; as such:

With that out of the way, let’s go down problem by problem…

This should be obvious, but some people start doing RTK (“Remembering The Kanji”) or Kanjidamage assuming that they’re going to be able to understand the words in Japanese text once they’re done, even if they can’t actually verbalize any of them and don’t know any of the grammar. This happens because things like RTK and Kanjidamage upsell the value of learning Kanji without explaining well-enough how Japanese writing actually uses Kanji in the first place.

Japanese kanji are used to write words or part of words. They’re not words on their own. Learning kanji does not result in understanding what any random chunk of text means. The best that can happen is seeing something like 春夏秋冬 and going “ah, the four seasons!”.

It’s true that things like 度 and 馬 have straightforward and hard-to-misunderstand meanings, but you’re still going to encounter things like 屹度 and 馬鹿 quite regularly, even early on. It’s impossible to escape from the fact that until you learn Words, you don’t actually know for sure what anything in a piece of text means.

And that’s just looking at ateji. Not even “words don’t mean what the sum of their parts mean” words like 適当, which are far more problematic to the kanji-focused learner.

This is not to say that learning how Kanji are used is not useful, just that the (small number of) people who are confused into thinking that Kanji knowledge will work as a substitute for vocabulary knowledge are going to waste a lot of energy.

Isolated Kanji knowledge does not map consistently to recognition ability

I have been learning Japanese for five years. I know the overwhelming majority of the Joyo kanji quite well. If I see a made-up word that I’m pretty sure is read with on’yomi, I have a very good chance of reading it and guessing its meaning correctly.

The other day I misread 平等 despite knowing both of the kanji in it very, very well for no reason other than that I have not seen 平等 often enough for my brain to decide to recognize it as its own entity and that, among very commong words, 平 is read as へい far more than as ひょう or びょう. In fact, among daily-use vocabulary, 平等 can be considered the only important on’yomi-based word where へい is not how 平 is read.

Someone who studied kanji in isolation would not have any idea which reading to pick here either. It’s not possible to know with any certainty that 平等 is read as びょうどう instead of へいどう unless you just know it.

平等 is also one of those words with a fairly (but not incredibly) specific meaning where the two kanji it’s spelled with do not necessarily narrow down the implied meaning far enough to know for sure just exactly how specific 平等’s meaning is unless you just know it.

Learning Kanji readings or keywords does not help you here. Only vocabulary knowledge does.

Putting the cart before the horse

This should go without saying, but if you don’t know any Japanese, it’s not useful to train the ability to write individual kanji as prompted by English keywords. There are better less-time-consuming ways to get the positive effects of kanji writing practice.

Leave actually getting good at writing Japanese until you know enough Japanese that it’s more than a party trick.

Until very, very, very recently, Remembering The Kanji was full of tons and tons of downright wrong “keywords” that gave backwards ideas about how Kanji were used. For example, it said that 町 was “village”, and that 村 meant “town”. This is completely backwards and there is no way that someone with a functional understanding of Japaense could have possibly made this mistake when constructing a learning resource.

The fact that this is now considered errata by RTK’s author or publisher does nothing to undo the damage that this has caused. It’s also a caught-red-handed example of how people with (at the time) very poor Japanese ability get away with creating and selling learning resources targeted at beginners that are not only very time-consuming but also riddled with obvious mistakes. Just one would be okay; you can move on from that; but spending three months memorizing that 町 means “village” and 村 means “town” is going to leave you with damage that takes a long time to wash away.

Before you say “but RTK isn’t teaching you meanings, it’s teaching you keywords!”, this is literally the first sentence of the introduction of the sixth edition:

The aim of this book is to provide the student of Japanese with a simple method for correlating the writing and the meaning of Japanese characters in such a way as to make them both easy to remember.

And it just gets worse from there:

Each kanji is assigned a key word that represents its basic meaning, or one of its basic meanings. The key words have been selected on the basis of how a given kanji is used in compounds and on the meaning it has on its own.

That having been said, the goal of this book is still to attain native proficiency in writing the Japanese characters and associating their meanings with their forms.

RTK goes out of its way to defend a close relation between its keywords and what kanji supposedly mean. There’s no way out of mixing up 町 and 村. Even supposing that RTK was indeed teaching arbitrary keywords with no intent to associate them with the kanji’s meaning, taking two kanji’s meanings and swapping them and using the swapped meanings as keywords should be inherently indefensible, as there is no benefit to doing so and can only cause confusion.

(RTK’s author has since, long after creating RTK, gone on to develop a very high level of proficiency in Japanese, working with it in an academic capacity. RTK should be considered a Dark Past, not a representation of his Japanese ability in the present day.)

Kanjidamage has similar problems, worsened by how goofy it tries to be.

Getting scared off by long lists of kun’yomi 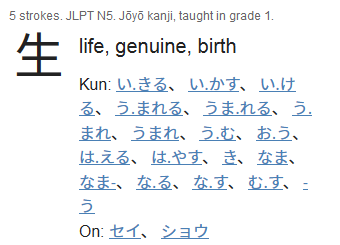 Only two or three of the readings here are worth knowing in isolation, and they’re readings you’re going to pick up very quickly as you learn common words.

In fact, kun’yomi are really just Japanese Words, which exist entirely independently of kanji, with their own entirely independent meanings and nuances, that just happen to be written with those kanji because of convention and because the meaning somewhat matches.

Not knowing this means being scared away by the prospect of having to memorize a dozen random readings with no rhyme or reason to what’s going on.

This is often cited by early isolated kanji study diehards as the #1 reason to go through with it.

I just don’t see it. Sure, when I started out I had a hard time visually breaking kanji down into their parts too, but that problem went away on its own as I kept learning new words, learning about radicals (the dictionary things), seeing stroke order diagrams (not even doing writing practice by hand), noticing kanji lodged inside of other kanji, and reading about the history of how random kanji came to look how they look today.

I also did indeed have a hard time telling similar-ish kanji apart way back when I was a beginner, even confusing things like 持 with 待 and 拾 with 捨.

But none of that ever actually caused me enough trouble to make me struggle or despair, and it went away on its own.

Your brain is good at getting used to things. Have a little faith in it.

I’m sure there’s something I missed, and I may very well go back and add a few more sections in the future. But I’d like to end this with a list of benefits of kanji study… the difference being that

this section is geared towards people who already have a functional grasp on Japanese.

Japanese people learn Kanji in school, so you might want to learn the Kanji too

Just not when you don’t know enough to put things in perspective. Both in terms of the material you’re learning and what you’re going to do with it.

It is very much not at all uncommon for Japanese writing to draw on shared cultural knowledge–in fact, it happens constantly–so it should be no surprise to hear that they draw on the shared knowledge of standard educational material as well. Without having that knowledge in some explicit form or another you’re lacking one more perspective natives have that you don’t on what you’re reading and how Kanji are being used or discussed in it.

If you have plans to move to Japan Very Soon, don’t embarass yourself by being unable to write your address

It is very true that, the overwhelming majority of the time, passive acquisition vastly outstrips active study for developing recognition abilities. Practice makes perfect. If you want to get good at recognizing something, you practice recognizing it. Easy.

However, there may eventually come a point where things happen too infrequently or in too limited of contexts for it to be easy for you to pick up on them naturally, especially if your brain is preoccupied learning other things.

This is the case with some relatively-uncommon kanji and their readings. At that point you might as well memorize them if you happen to know that you need to know them, rather than waiting an extra seven or eight years to have seen them enough to know that you’ll never forget them again.

Especially because, at such a stage, the actual volume of actively-studied kanji will be very low, such that it will be very low-effort to retain them with even rudimentary memorization practices, like physical flashcards.

…By the way, stroke order is essentially a complete non-problem.

This page was generated by GitHub Pages.